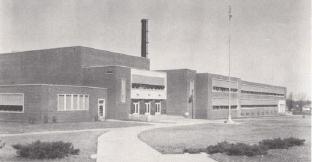 Rich: As we were wondering what kind of a program to present tonight, our grandsons gave us an idea. The boys were at our house one evening, and found an old Viewmaster. They had never seen anything like it, and asked what else we had from the " olden days." We brought out some old Bugs Bunny and Roy Rogers (The King of the Cowboys) story records, and the boys were enchanted. But, they wanted to know why we just didn't have these stories on videos or DVDs. They didn't grasp the fact that THINGS WERE DIFFERENT WHEN WE WERE YOUNG! How do you explain to the technology generation that we played with toys with no batteries, no computers, no video games? We used our imaginations when we played, by ourselves and with each other.

We decided we would write a letter to our grandsons about how it was in the " olden days." We would like to share this with you.
Dear Christian, Nicholas, Michael, Jax, Addison, Jace, and Weston,

Rich: Grandma and I decided to write you a letter about our childhood. We hope you enjoy hearing about the " olden times."

When we were kids we had no tv, tape cassettes, computers, DVDs, Game Boys, or videos. How did we survive? We played with friends and used our imaginations.

Every family had a wagon. We both had Radio Flyers. I could become a race car, a covered wagon driver, a space ship commander (we didn't know the word " astronaut" .) We built with real wooden Lincoln Logs and Tinker Toys and metal Erector sets. We constructed forts and castles with drawbridges with a set of blocks, maybe homemade by Dad or Grandpa.

Rita: Girls had dolls, and the dolls didn't do anything, except maybe wet their pants. It was expected that we would practice for future motherhood with those dolls. We had wooden ironing boards, little metal irons, china or glass dishes, and many other domestic toys that started early to prepare us for our lot in life, wifedom and motherhood. Paper dolls, too, were popular. You could inexpensively have fabulous wardrobes for these lovely creatures, and when your little brother destroyed them, or they tore or wore out, they were easily replaced. We also played dress-up with our mother's, sister's, or older friends old clothing.

We read books. Some of the popular series were Nancy Drew, the Hardy Boys, the Bobsey Twins, and the Boxcar Children. All of these stories had challenges, but you knew that everything would come out fine, and they would live happily ever after—until the next book came out. We went to the Cedar Falls Public Library for the fun of it, especially in summer when it was hot and the library was cool.

Rich: We played board games on a cardboard board, games like Monopoly, Checkers, Chinese Checkers, Chess, or Sorry. The game pieces were wooden or metal, not plastic. We also played cards. For the little kids there was Old Maid and Animal Rummy. As we got older we went on to Canasta, Slap Jack, Gin Rummy,and Pinochle.

Rita: I had a record player. I remember my record player, a tinny-sounding machine in a thick cardboard box with a paper covering to look like leather. Our childhood records came in colors, most red, but some blue or another bright hue. Later we got bigger and better sounding record players that played 12-inch LPs—long playing records. These players were called " Hi-Fi" s. The quality was better, but not much.

Rich: When we outgrew our all-metal tricycles, we graduated to scooters. After we outgrew the scooter, we went on to a bicycle! The bike gave a lot of us our first taste of freedom, and we pedaled several blocks from home on our own to meet friends. Bicycles came in two sizes: small and large, and two styles: boys and girls. We coveted anyone who got a brand new bike. They were big, heavy, shiny, one speed, and beautiful! I envied the people who had a horn and a light on their bike.

We played outside with our friends. We met in yards, parks, and school yards. We played sports, often even by the official rules, but we made up variations to these sports so all of the kids could be included, and we invented new games. Every neighborhood had its own variation of hide-and-seek, and the best time to play this was at night.

Rita: Most neighborhoods had an understood signal for when it was time to go in at night. In my neighborhood when the Zephyr Rocket, a passenger train, went by at 9:20 parents expected to see you in the house a minute later. In the summer, we went to the old swimming pool. It was huge, cold, weedy, reedy, fishy, smelly, and wonderful. We attached roller skates to our shoes, tightened them with a key, a skated all over the neighborhood.

Rich: In the winter, we ice skated at Clay Street Park or at Prexy's Pond at ISTC (now UNI), or anywhere we could find ice. Those of us in the Lincoln School area sledded down Tremont Street hill. It was a long way up, but a thrill coming down at top speed for three blocks.

We met our friends at the neighborhood stores where we bought penny candy and bubble gum, 10¢ pop and popsicles you could break in half and share with a friend.

Rita: Our homes were different from your homes. Families had radios, big, bulky, wooden radios. They were the center of the living room. It took several minutes for the tubes to warm up but, when they did, our families enjoyed news, variety, comedy, mystery, drama, and musical shows. We did not know what our favorite radio actors looked like, or what the background was supposed to be. We used our imagination, and each one of us had a different idea in our mind of the show being presented. Portable radios were colorful, and weighed about ten pounds, but allowed us to have music at the pool or on a picnic. When television arrived, we had big, bulky wooden boxes with a small screen that we all gathered around. Every television had to have a tv lamp, because if you watched tv without a light in the room you would go blind within a few weeks. With the advent of television, you had to have a set of television trays! As I recall, they were either black or white with pink and yellow flowers on them.

Rich: Our homes were heated with coal or oil furnaces, we talked on party telephone lines, (that means you shared your phone line with other families), had new Formica dining tables, refrigerators with real freezer compartments that had to be defrosted, metal ice cube trays, wringer washing machines, clothes lines, ironing with no permanent press clothing. We shoveled snow with shovels and cut grass by pushing the mowers. Cameras were large, had many settings, and big flash bulbs that sometimes went off when you wanted. We had 8mm movie cameras, and when they were pointed at you, you waved or did something else that required little moving. We all had chores to do around the house, and we didn't get paid to do them. We did them because we lived in the house and it was part of our family responsibilities.

Rita: We shopped in downtown Cedar Falls. You could tell by the signs out front what was sold in that store. Hardware stores sold hardware, lumber yards sold lumber, shoe stores sold shoes, (and X-rayed our feet so we knew if we had a good fit) and clothing stores sold clothing. Even though the pharmacy did not sell farms, we knew they sold drugs, sodas, ice cream, stationery, and perfume. And—we had Woolworth's 5¢ and 10¢ store (an early day Wal-Mart) where you could actually buy things for 5¢ and 10¢! The day after Thanksgiving all of these stores would advertise the latest gifts for the Christmas season, not the day after Labor Day as stores do now.

Rich: A real treat was to go all the way to Waterloo to shop. Blacks, Penneys, Sears, Wards were big department stores. How exciting! We could travel by way of Rainbow Drive, which brought us out at John Deere, Highway 20, which was north of town, or highway 218 which ran roughly the way University Drive runs now, but through farm land. The most fun waa to take an electric trolley car to downtown Wateerloo. It seemed to take forever to go to Waterloo, but it probably took 20-30 minutes.

Rita: We went to school at Humbert, Main Street, Cedar Heights, Miner, Lincoln, and in our late elementary years, North Cedar. At least some of our years in elementary school we had the old desks that were screwed down into the floor. In fourth grade, we had something new: cursive writing with the dip pens that blobbed at the bottom of the page and we would have to do it over. We had seat work, workbooks, memorization, and separate gym classes for boys and girls. Unless we lived more than a mile away, we went home for lunch. Occasionally a movie would be shown, if there was anyone who could run the projector. We saw exciting films such as Wheat Farming in Nebraska or Pittsburgh: Steel City. Wow!

Rich: On the school playgrounds boys played sports, and girls played hopscotch, jacks, jump rope, and running games. Our playground equipment was teeter-totters, jungle gyms, and merry-go-rounds with good old Iowa dirt under them to cushion our falls.

Principals were feared by the students, and teachers were respected—and supported by the parents. Paddling was permitted, but rarely used.

We didn't exactly have a dress code written down, but we all knew that boys wore slacks and shirts, and girls wore dresses or skirts and blouses. This was the way it was all through our public school years. You had your school shoes, and you have your special high-topped tennis shoes used only for gym class! We all pretty much dressed alike—until junior and senior high.

Rita: By junior and senior high it was important to follow the fads. Girls were allowed to wear slacks to school on special days, and those slacks had better be black with a buckle on the back that served absolutely no purpose. We wore poodle skirts, pleated skirts, can cans (Great big fluffy slips that made your skirt stand waaaaay out)—the bigger the better, saddle shoes, white bucks, pedal pushers, Bermuda Shorts, wool coats, cardigan (Perry Como) sweaters, and letter jackets, and rubber boots—ugh! The guys used butch wax to keep their flattop flat, hair tonic to keep their severely parted hair in place, and how the ducktails stayed in place is still a mystery. Girls slept in brush rollers so their poodle cuts or flip hairdos would be perfect.

Rich: We hung out at Bergs and Hiebers drug stores where they had real soda fountains. Bakers and Potters were downtown ice cream stores. We danced every Saturday night at Teen Time at the Rec Center. We had parties at our homes, and at school. We roller skated at the Roller Drome. We had the Regent Theater where we watched films, several theaters in Waterloo but, until we could drive, they were a special treat. Our families went to drive-in movies—that's where you sit in your car, attach a speaker to your window, and watch a movie on a huge screen.

Well, boys, this is just a little bit about how it was when we were growing up in Cedar Falls. If you want to know more about US, ask. Ask what the naughtiest thing was we ever did. Ask what kind of underwear we wore. Ask about our friends, your uncles, and great-grandparents. We hope you enjoyed this letter.

Love to all of you from,